The Types of Bullying and Where It Leads Too 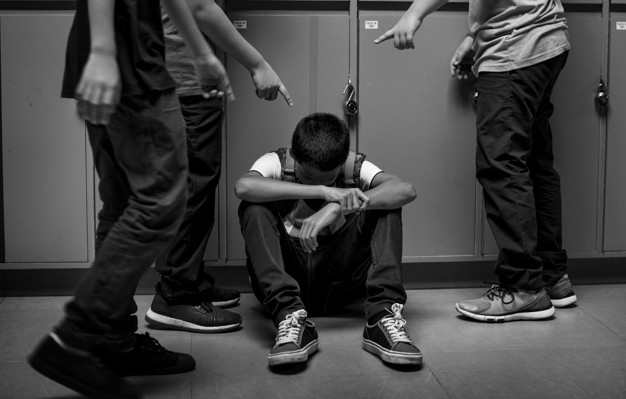 Boy student getting bullied in school

There so many ways of bullying, it could be physical, verbal, face to face or even through the internet. Often resulting negative outcomes from both side of the parties, the strong one gets more aggressive, the weaker one gets more oppressive.

A study of 17,000 Vancouver, BC students has found that schoolyard bullying and cyber-bullying have very different characteristics. Jennifer Shapka, associate professor in the Faculty of Education at UBC said:

“There are currently many programs aimed at reducing bullying in schools and I think there is an assumption that these programs deal with cyberbullying as well. What we’re seeing is that kids don’t equate cyberbullying with traditional forms of schoolyard bullying. As such, we shouldn’t assume that existing interventions will be relevant to aggression that is happening online.”

UBC studies show that 25-30% of the students have been involved in cyber-bullying – as perpetrators or victims – compared with 12% in schoolyard bullying. Most (95%) cyber-bullying consider it to be ‘joking’. Jennifer Shapka says “It is clear that youth are underestimating the level of harm associated with cyberbullying. Students need to be educated that this ‘just joking’ behaviour has serious implications.”

Whereas ‘traditional’ bullying has three components:

cyber-bullying appears to lack planned targeting of the victim and the same individuals can be victim, witness and perpretrator.

While it is often assumed that bullying leads to psychological problems a new study suggests that addolescents suffering from depression are more likely to be the victims of bullying.

The researchers looked at data from 486 young people from fourth to sixth grade – part of a large-scale longitudinal study begun in 1992 and continued for nearly two decades. The information was provided by parents, teachers, peers and students themselves through yearly surveys. The study showed that being depressed in fourth grade predicted peer victimization in fifth grade and difficulty with peer acceptance in sixth grade,

“Adolescence is the time when we see depressive symptoms escalate, particularly in girls. This may be due to the onset of puberty or interpersonal challenges, such as emotionally demanding peer and romantic relationships, which are often experienced during adolescence.

Parents and teachers in the study were asked to identify classic signs of depression, including crying a lot, lack of energy, etc. to determine which young people suffered from the condition. ‘Peer victimization’ was defined as bullying that was manifested physically, verbally, or relationally, such as:

“Teachers, administrators and parents need to be aware of the signs and symptoms of depression and the possibility that depression is a risk factor for problematic peer relations.” She added that research shows that positive peer relationships are crucial for adapting to certain aspects of life such as scholastic achievement and healthy psychological functioning.

“If adolescent depression forecasts peer relationship problems, then recognizing depression is very important at this particular age. This is especially true given that social adjustment in adolescence appears to have implications for functioning throughout an individual’s lifetime,” Karen Kochel added.

The authors of the study consider that school may be the best place to observe and address signs of depression in teenagers as students often begin to spend more time with friends and less with parents as they become adolescents.

“We studied peer relationships within the school context. Parents tend not to observe these relationships. Because depression has the potential to undermine the maturation of key developmental skills, such as establishing healthy peer relationships, it’s important to be aware of the signs and symptoms of adolescent depression.”

“Longitudinal Associations among Youths’ Depressive Symptoms, Peer Victimization, and Low Peer Acceptance: An Interpersonal Process Perspective” by Arizona State University School of Social and Family Dynamics Professor Gary Ladd; Karen Kochel, who conducted the study for her dissertation; and Karen Rudolph of the University of Illinois. is published in the journal Child Development

Research from Yale School of Medicine published in the International Journal of Adolescent Medicine and Health in 2008 identified an apparent link between bullying or being bullied and suicide in young people.

“While there is no definitive evidence that bullying makes kids more likely to kill themselves, now that we see there’s a likely association, we can act on it and try to prevent it.”

Bullying was found to affect between nine and 54 per cent of participants. Almost all studies identified connections between being bullied and suicidal thoughts, with victims between two and nine times more likely to report experiencing this state of mind. Perpetrators were also found to be at increased risk of suicidal behaviors.

Researchers explain that the design of studies reviewed made it impossible to determine conclusively whether bullying leads to suicide. Most failed to take into account the influence of other factors like gender, psychiatric problems or a history of suicide attempts.

Young-Shin Kim argues that bullying should be taken seriously rather than being dismissed as an inevitable part of growing up. In the United States, bullying has been identified as a contributory factor in acts of extreme violence, including the Columbine High School massacre. Her own interest was sparked by a visit to South Korea where the introduction of several new slang terms referring to bullies and their victims was indicative of “an elaborated system of bullying.”

Young-Shin Kim is currently studying whether being bullied actually leads to suicide, but cautions that other factors that may increase susceptibility to both bullying and suicide have to be excluded first. She suggests that existing research should encourage adults to pay more attention to bullying and signs of suicidal behavior in young people.

“When we see kids who are targets of bullying, we should ask them if they’re thinking about hurting themselves. We should evaluate and prevent these things from happening.”

Research from Ontario’s York University and Queens University published in Child Development found that young people who bully tend to have problems in other relationships, such as with parents and friends. The study concludes that effective prevention and intervention strategies should include those relationships, as well as aggression and morality issues arising from bullying itself.

Researchers studied 871 students (466 girls and 405 boys) over a seven-year period from the ages of 10 to 18. Participants were questioned annually about their involvement in bullying or victimizing, their wider relationships, and other positive and negative behaviors.

The study concluded that a majority of children engage in bullying at some point.

Researchers found that children who bullied tended to be aggressive, lacked a moral compass and experienced significant conflict in relationships with their parents. Relationships with friends similarly involved a lot of conflict, and they tended to associate with other bullies.

“Interventions must focus on the children who bully, with attention to their aggressive behavior problems, social skills, and social problem-solving skills. A focus on the child alone is not sufficient. Bullying is a relationship problem that requires relationship solutions by focusing on the bullying children’s strained relationships with parents and risky relationships with peers. By providing intensive and ongoing support starting in the elementary school years to this small group of youth who persistently bully, it may be possible to promote healthy relationships and prevent their ‘career path’ of bullying that leads to numerous social-emotional and relationship problems in adolescence and adulthood.”